The stern of the second Russian projection and command (BPC type) Mistral « Sebastopol » is on its way to France. 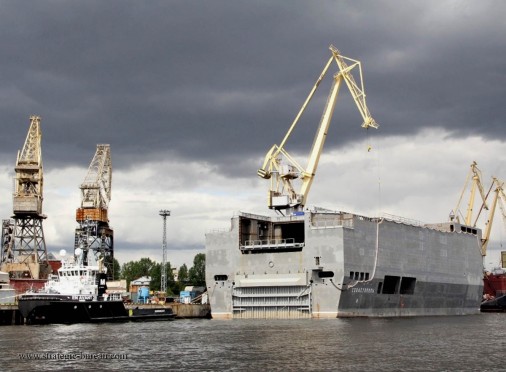 The rear of the second Mistral projection and command vessel (BPC type), under construction for the Russian Navy, has left for France the 26-27th of June 2014. The stern is identical to the first command and protection vessel built by the Russian ship-owner Baltiïski Zavod from Saint Petersburg.

Initially the departure was programmed for the 16th of June but was set back due to unfavorable conditions on the Baltic Sea. It will take approximately 3 weeks to reach St. Nazare. The towing of the vessel is under the responsibility of the Dutch ship « En Avant 20 » who has already towed the stern of the first projection and command vessel from the 8th – 25th of July 2013. The first BPC Mistral type projection and command vessel, baptized “Vladivostok”, is planned for delivery to the Russian Navy in October of 2014 and the second “Sebastopol” in autumn of 2015.