Ukraine will provide the Indonesian Marines with the BTR-4 wheeled armored personnel carriers. The signing of contracts for the first batch of five BTR-4s is expected in the first quarter of this year. 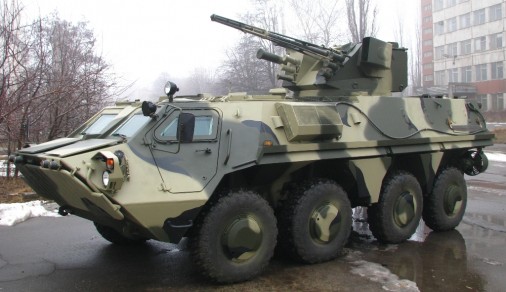 Ukraine won the bids of the Indonesian Defense Ministry for the wheeled armored vehicles. The signing of purchase contracts for the first batch of five BTR-4s is expected in the first quarter of this year. In August 2013, an Indonesian military delegation went to Ukraine to appreciate the capabilities of the BTR-4 on testing grounds near Kharkov.

Indonesia’s needs for wheeled armored personnel carriers are a total of 55 units. The armored vehicles are for the Marines, to replace the aging Indonesian BTR-50. Indonesia already has the Russian BMP-3F, a special version of the BMP-3, optimized for landing missions; the final series of 37 armored vehicles were officially admitted into service during a ceremonial parade on January 27th.

The BTR -4 is designed to carry an eight man combat group, in addition to the three crew members. It is armed with a 30 mm automatic cannon, stabilized in elevation and azimuth. Its maximum speed is 110 km/h, with a combat ready weight of 18 t.