On the last 12th of December, the new light ground attack aircraft « Scorpion » has successfully completed its first flight 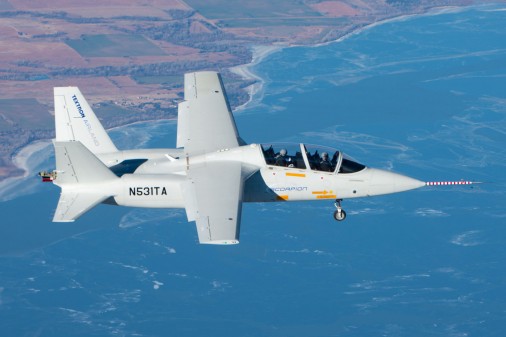 On the last 12th of December, the new light ground attack aircraft Scorpion successfully completed its first flight, taking off from the U.S. Air Forces « McConnel » base in Kansas. Scorpion is developed by the American company Textron AirLand.

The first designs of the aircraft were drafted in January of 2012, and beginning in September of 2012, the aircraft underwent wind tunnel testing in the United States and in the United Kingdom. The short design speed is due to the use of existing and proven technologies. Textron has placed themselves in the niche for light attack aircrafts meant for missions with low anti- aircraft threat.

The main advantage of the Scorpion is it’s less than $20 million price tag and operational costs not exceeding $ 3,000 an hour. The president of Textron AirLand , Bill Anderson, stated that the aircraft could be delivered to prospective clients between 15 and 18 months after signing the initial contract.

Scorpion is developed on equity from Textron AirLand. This is a 9.6t two-seater and double reactor jet. Its dimensions are 13.3 m long and it has a wingspan of 14.4 m, maximum speed is announced at 833 km/h and maximum range is 4,400 km. It can be fitted with various combinations of bombs, rockets and missiles with a maximum weight up to 2.8 t.