The first Boxers have entered into service within the Dutch forces. 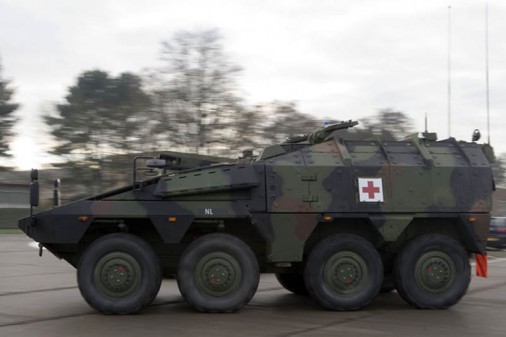 The first batch of Boxer armored 8×8 vehicles have entered into service in the heart of Dutch units in its version “Boxer Ambulance”. It is destined to replace the chained YPR Medical within the 13th Medical Company from Oirschot.

The Netherlands have ordered 200 units of the Boxer in 5 different versions: 60 Boxer Command vehicles, 52 Boxer Ambulance, 53 Engineering, 27 cargo and 8 for training purposes.

The training vehicles meant for the formation of the pilots and crew chiefs were delivered between August of 2013 and January 2014. The first Command Post vehicles are expected in 2015, followed by the Cargo and Engineering versions. All vehicles will be delivered at the horizon of 2018.