Russian paratrooper units have begun testing on the new BMD-4M armored vehicles. A pre-series of ten BMD-4Ms were ordered in 2012, the first of which started intensive evaluation trials. 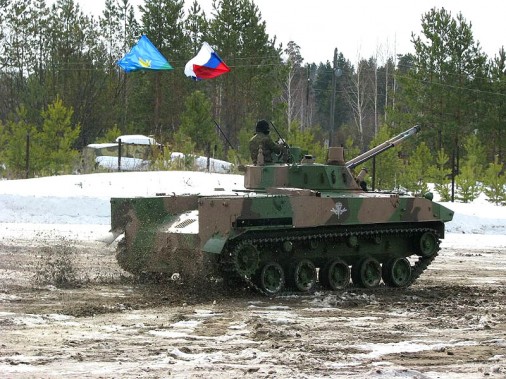 Russian paratroopers units have begun testing of the new BMD-4M armored vehicle. Parallel to the revalorization of the older generation within their vehicle park, the paras are looking to acquire a new vehicle. A pre-series of ten BMD-4Ms were ordered in 2012, the first of which started, since the 1st of December 2013, intensive evaluation trials.

The BMD- 4M prototype was unveiled in 2008, it has a new tracked frame with five guide rollers, strongly resembling the BMP-3 infantry vehicle. The weapon systems of the BMD- 4M is identical to its predecessor, the BMD- 4. It is equipped with a 100 mm gun with anti-tank missile firing capabilities combined with a tandem fully automatic 30 mm cannon and a coaxial 7.62 mm machine gun. The weight of the BMD- 4M is maintained at 13.5 t to remain airborne with the existing multiple dome parachute system. If necessary, the vehicle may be equipped with additional armor plating.

The team of former Russian defense minister Anatoly Serdukov was opposed to this project and only the persistence of the commander of the paratrooper forces, General Vladimir Shamanov, permitted to save the project. Since the arrival of the new minister, Sergei Shoigu, the program BMD- 4M has received the green light for the pre-series and its possible commission.